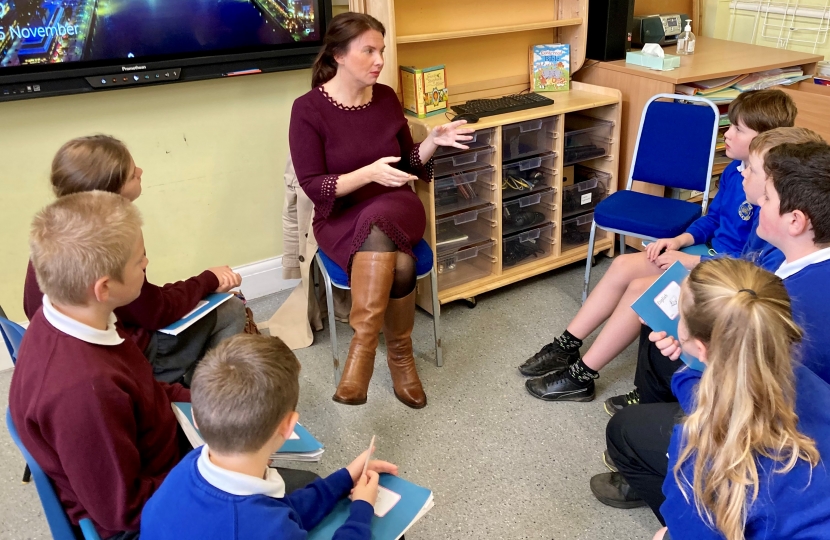 Trudy has enjoyed a question-and-answer session with pupils from Waberthwaite School as part of UK Parliament Week.

Trudy was quizzed by pupils from Years 4, 5 and 6 on her role as an MP and the structure of the Houses of Commons and Lords. Their questions also covered the process of taking Bills through Parliament, speech-making and climate change, while a smaller group had the opportunity to discuss electric vehicles and the decarbonisation of transport through Mrs Harrison’s role as a Minister in the Department for Transport.

Trudy said: “I was very impressed with the pupils’ levels of knowledge and enthusiasm, and their questions were very well thought-out and presented.

“During UK Parliament Week, I was particularly pleased to hear more about the school’s own pupil council, which is truly democracy, debate and decision-making in action.”

“Her visit allowed the children to really understand the democratic process and the role of an MP. She answered so many of the children’s questions on subjects they are passionate about, including climate change and transport, and it also allowed them to see how their actions could initiate change locally, nationally and perhaps even globally.”

Other Copeland organisations who took part in UK Parliament Week (November 1 to 7) were Keswick School, Moresby School and Beckermet Brownies.

Trudy has welcomed the announcement that five organisations in the constituency will received over £900,000 in the latest round of Culture Recovery Fund grants.