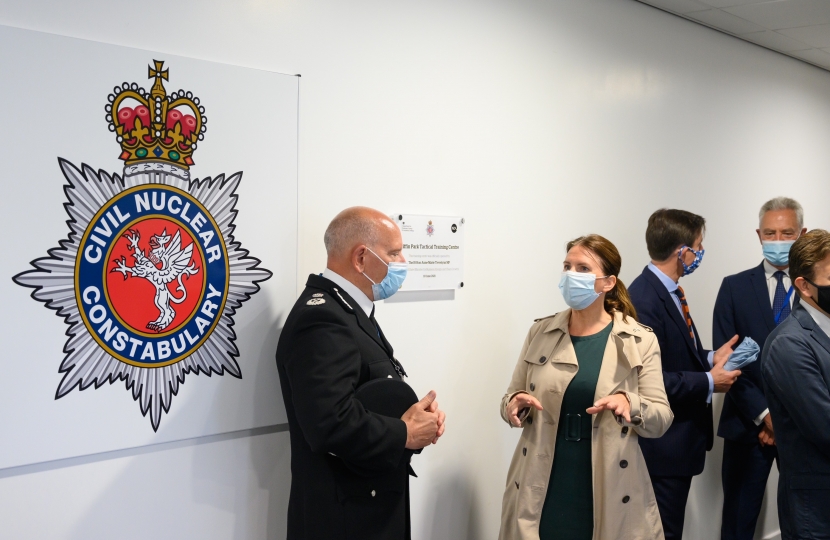 Trudy Harrison MP shone a light on next generation nuclear to the energy minister during a visit to Copeland.

The local MP joined Energy Minister, Anne-Marie Trevlyan MP on a visit to the Civil Nuclear Constabulary where she discussed her roadmap to securing the area’s nuclear future.

The MP and co-chair of the Nuclear Delivery Group highlighted Copeland’s world-class nuclear capabilities and her vision for a Rolls-Royce reactor to be sited at Sellafield.

Trudy said: “Today welcoming the Energy Minister to Sellafield, I talked about the importance of next generation nuclear and my plan for a Rolls-Royce reactor to be sited at Sellafield.”

This visit follows the announcement from EDF this week that Dungeness nuclear power station in Kent has reached the end of its life, with defueling set to begin immediately.

It was also announced that Hunterston B in North Ayrshire, Scotland will begin its final six months of electricity generation before moving into the defueling phase.

Trudy added: “As both Dungeness and Hunterston power stations face defueling, after decades of dependable service, the pressure is on to secure the baseload, clean energy that only nuclear energy provides.

“Here in Copeland, we have the site, technical knowledge, community support and manufacturing capability.”

Last month, the Nuclear Delivery Group, co-chaired by Trudy and Ynys’s Mon’s MP, Virginia Crosbie, reached a pivotal moment after presenting their proposed net-zero roadmap to Government which aims to push forward an agenda for new nuclear in the UK.

The group was formed in December last year with industry partners to discuss the role of atomic energy in achieving net zero and levelling up ahead of the United Nations 26th Climate Change summit in November, being hosted by the UK in Glasgow.

It is made up of leading industry experts from the National Nuclear Laboratory, the Centre of Nuclear Excellence, BEC Business Cluster, NW Nuclear Arc, UKAEA, Cavendish Nuclear, Jacobs, Nuclear Industry Association, Nuclear AMRC, and the Nuclear Institute including their Young Generation network.

Trudy is honoured to have been appointed as a Parliamentary Under Secretary of State at the Department for Transport.