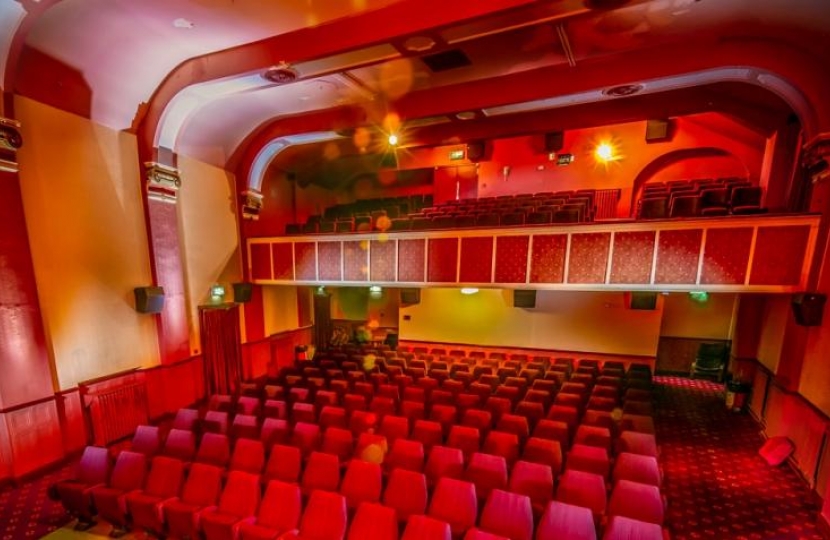 Keswick Alhambra Cinema are set to receive a funding boost as part of the government’s £1.57 billion Culture Recovery Fund, which has been welcomed by Copeland’s MP.

Announced today by Culture Secretary, Oliver Dowden, the Keswick Alhambra is one of eight cinemas across the North West to have been boosted by the UK Government’s Culture fund, in the first awards made by the British Film Institute (BFI) to support England’s screen sector.

The British Film Institute (BFI) is allocating £30 million in grants on behalf of the Department for Digital, Culture, Media and Sport (DCMS) to support independent cinemas as they reopen.

Keswick Alhambra are set to receive £4,884 from the £30 million pot being allocated by the BFI on behalf of the Department for Digital, Culture, Media and Sport (DCMS).

Trudy, said: “This unprecedented package will be a welcome relief for many arts venues across the country.

“Venues such as these are so important to towns like Keswick and I am pleased that Government is tackling the crisis facing our most loved arts organisations and heritage sites through the Culture Recovery Fund.”

35 other venues across England will receive grants totalling more than £650,000 in the first awards to be allocated from the £30 million fund.

Culture Secretary Oliver Dowden said: “During lockdown many of us sought comfort in the escapism of a good film from our living rooms, but nothing can beat watching something for the first time in a cinema.

“This funding is just the first tranche of our help for independent cinemas with more support to come up and down the country each week. The government has proven that we are committed to being here for culture and I urge the public to also play their part and support their local independent cinemas too so that they have a sustainable future.

“We’re supporting our great British film industry at every step of the screen supply chain through the Film and TV Restart Scheme which will keep cameras rolling on productions across the country as well as the vital funding announced today for our independent cinemas.”

This important cash boost of more than £650,000 will help independent cinemas - the cultural organisation closest to home for so many people - weather the storm of the coronavirus pandemic.

Cinemas are able to apply for Safety Grants, to help independent venues meet the additional costs of creating a safe and Covid-secure environment for staff and audiences, and Business Sustainability grants of up to £200,000 to help stabilise venues as they reopen.

The £30 million fund will remain open for applications until 30 October and support for cinemas making an application is available from the BFI.

To support the UK’s film industry at every point of the screen supply chain the government has also opened the application process for the Film and TV Production Restart Scheme to help productions get the cameras rolling.

Chancellor, Rishi  Sunak, said: “The UK’s cinemas and film & TV production industry are a key part of our culture - they provide thousands of jobs and help to entertain the nation. So I’m delighted that we can support independent cinemas through the Cultural Recovery Fund, and help to get productions up and running again through the Film and TV Production Restart Scheme, protecting vital jobs across the industry.”

The £500 million Scheme is designed to help TV and film productions across the country that have been halted or delayed by a lack of insurance to get back up and running. The Scheme will give productions the confidence they need that they will be supported if future losses are incurred due to Covid-19.

Detailed eligibility criteria for the scheme are available online so that productions can prepare applications ahead of the scheme formally opening in the coming weeks.