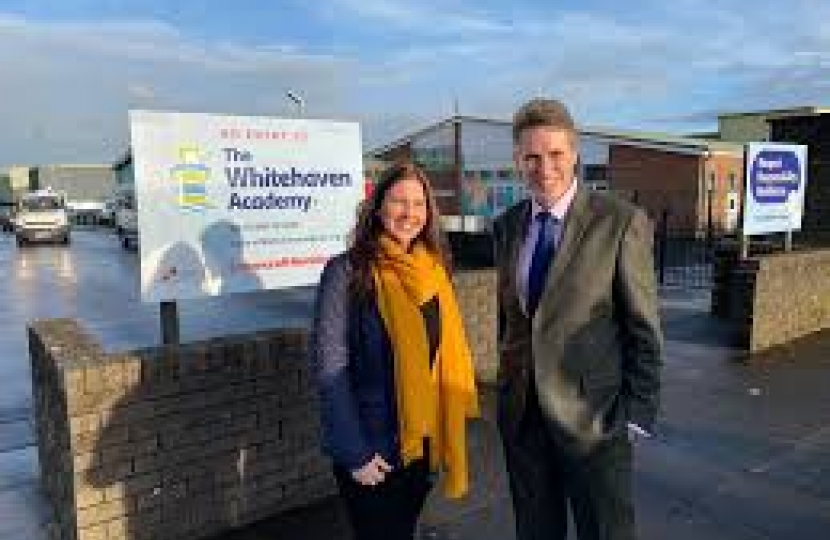 Work has officially begun on an eyesore academy, and Copeland MP Trudy Harrison can't wait to see the finished result.

The multi-million pound work on Whitehaven Academy began yesterday, and will see the run-down school demolished and rebuilt, almost four months after plans were given the go-ahead in March.

Approval for the plans was initially on-hold due to objection from Sport England, which stated the new sports hall facilities would be reduced from its current size.

But campaigners fought relentlessly for the school to receive its much-needed makeover, and were thrilled when Sport England withdrew its objection, allowing the plans to be rubber-stamped.

In a letter to parents and pupils, head teacher Nigel Youngman said: “The young people of Whitehaven deserve a brilliant space in which to learn and I would like to once again thank all those members of the Trust, school and wider community who have worked tirelessly to make this happen.

“I look forward to 2022 and welcoming you to the opening.”

Set to be complete in spring 2022, with landscaping finished in autumn the same year, the ambitious work will see 21 new classrooms, seven science labs, two art studios with views across to the Lakeland fells and three design and technology rooms.

The new build, at 6,720 sq metres, will also nearly double the school’s capacity, allowing it to hold 900 students compared to its current 540.

The new three-storey facility will also allow the academy to offer a post-16 education, after entering into an agreement with Workington Academy to create a shared sixth form that will share resources and operate from both schools.

And MP Trudy Harrison couldn't be happier, saying: "This really is brilliant progress.

"I and many others have been worried that the crisis was stalling development at the school, but now having the green light means there will be non-stop progress and a new build to look forward to.

"Credit to head teacher Nigel and everyone on the design and construction team for finding a way through the difficulties."

She added: "I'm so pleased ]Department for Education] continue to support us in Whitehaven, and I'll be visiting the academy site just as soon as permitted."

Mike Starkie, Mayor of Copeland, is also delighted to see the plans becoming a reality, and said: “It is tremendous news that work is starting on the rebuild of Whitehaven Academy.

“It has been a long road to get here, but the pupils and the school community deserve the best possible facilities – and this project will deliver precisely that.

“You cannot overstate the importance of a child’s education, and the new [build] will enhance the quality of education and sporting provision on offer.”

He continued: “I’d like to congratulate the parents and whole school community who have always fought so hard for a better outcome for the children.”