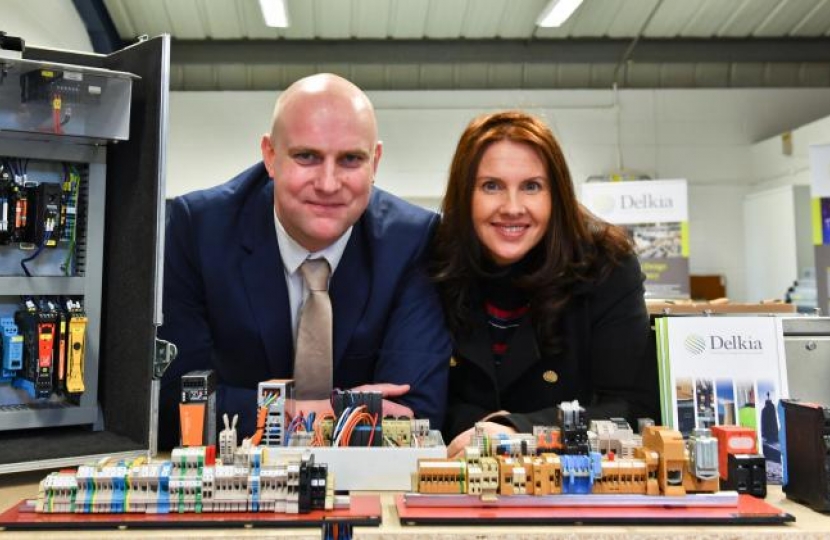 The boss of a rapidly growing SME has revealed ambitious expansion plans from its new headquarters in West Cumbria.

Delkia managing director Kurt Canfield outlined plans for the company to open offices in Barrow, Warrington, Glasgow and Devonport over the next few years at the opening of the company’s new base at Egremont’s Bridge End Industrial Estate.

And the company – which designs and manufactures integrated systems for the nuclear and defence sectors – is already planning to expand its new West Cumbrian base to keep up with growing demand from its high-profile roster of customers, which include Sellafield Ltd, National Nuclear Laboratory, LLWR, Morgan Sindall, Siemens and BAE Systems.

The last 12 months have seen Delkia undergo dramatic growth – with its number of staff rising from two to 15 and a 1,000 per cent increase in its sales and turnover.

It has also moved from its small base at Cleator Moor to open a bigger headquarters in Egremont in a bid to create a ‘hive of activity’ with close neighbours that include James Fisher Nuclear and Thomas Graham.

Mr Canfield said: “Our growth has been a surprise, but everything has come at the right time in terms of the amount for effort we’ve put in in the last 12 months.

“I’m really thankful to the team for believing in the vision we have and having the tenacity to push forward. I’m particularly thankful to Robin Oliver, projects director, and Dick Monaghan, business development director, who have invested in the business and are loaded with experience that will be critical to its success.

“We’re very ambitious. We have a plan to get to £20 million in terms of turnover in the next seven years. And there’s nothing stopping us going overseas. The sky’s the limit.”

Mr Canfield said the move to Egremont was driven by both its desire to be closer to its clients and to leave a lasting economic impact on the town.

“It will bring inward investment, and grow opportunities for apprentices, graduates and future employees,” he added.

Delkia was first created in 2013 as an engineering and manufacturing division of its big brother, Safety Critical, which specialised in asset and people protection in highly regulated industries.

He returned to Delkia, which had downsized in his absence, in March last year.

Its dramatic resurrection was praised by Copeland MP Trudy Harrison, who unveiled a plaque to mark the opening of Delkia’s new headquarters.

She said: “The fact you can build a business here apply those skills and services to different industries and export them across the globe is fantastic and I want to see much more of this.

“Delkia is doing what we need many, many more business to do.”