Trudy thanks Army for 'commendable' work at Cumbria Covid-19 test 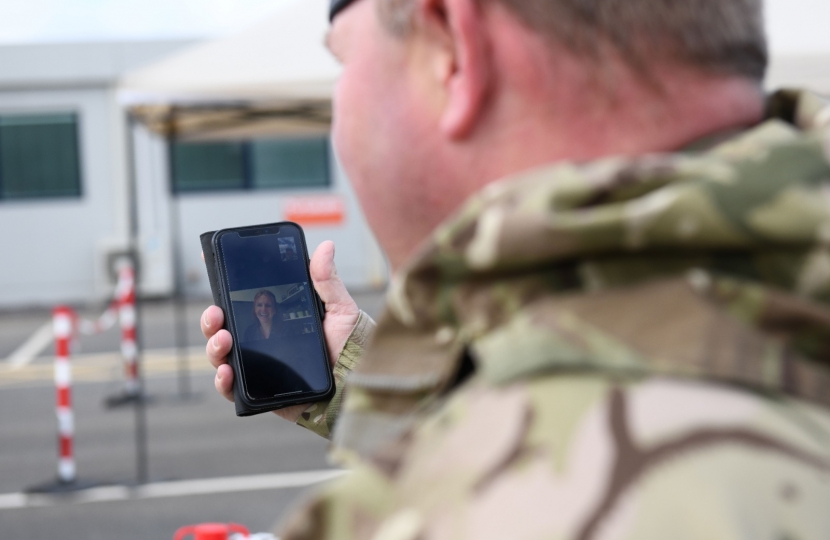 The MP for Copeland has paid tribute to the British Army, thanking them for their support during a virtual visit to a Cumbria based Covid-19 test centre.

This week, the Mercia regiment received a video call from Trudy Harrison MP as they set up the remote testing facility.

Mrs Harrison was a given a virtual tour of the drive-through station in Lillyhall, before virtually speaking with officers and learning more about the testing process.

So far, the British Army has undertaken over 11,000 tests, with nine Mobile Testing Units based across the North West as well as permanent testing sites in Kendal, Preston, Penrith and Gateshead.

Mrs Harrison, said: “The NHS and British Army are working incredibly hard, to ensure we continue to be ready, resilient and responsive to all the challenges the Coronavirus may bring.   Lt Jack McCormack explained to me the system they had in place to efficiently test 100’s of people within the drive through testing site that involves taking a swab for analysis.

"Due to the social distancing measures in place, I was unable to visit the testing site in person, however, in this modern world of video communications, it was the next best thing, and I was able to personally thank the team without interrupting their most important and commendable work.”

The Government with the support of the British Army are continuing to establish a network of drive-through regional testing sites.

The test involves taking a swab of the nose and the back of the throat, which can be done by the person themselves (self-administered) or by someone else (assisted).

Mrs Harrison was virtually  introduced to Lt Jack McCormack of the Mercian Regiment who was overseeing the testing at the Country Highways department at LillyHall,  Lt McCormack said, ‘The UK Armed Forces are supporting the government’s efforts to increase our national testing capacity, the mobile testing units are a way in which we can test more key workers’. He added. ‘It’s great to be involved’.

Last week the Government widened the testing capacity allowing people displaying symptoms over the age of 65, or those required to travel for work to choose between four regional drive through test sites in Kendal, Preston, Penrith and Gateshead.

Testing is also available for all eligible essential workers at those sites in Penrith, Kendal, Preston and Gateshead. Eligible health and social care staff can also access locally run testing centres in Barrow, Carlisle, Kendal, Lancaster and Whitehaven through their employers.