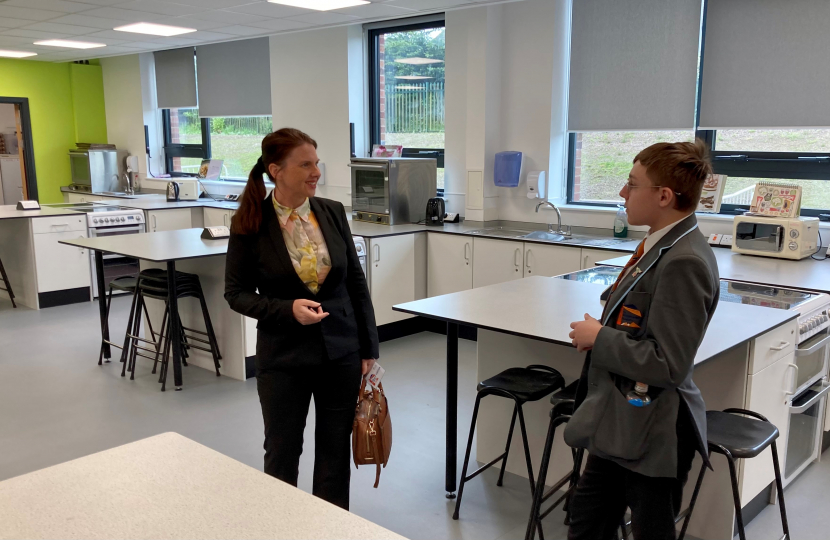 Trudy has enjoyed a tour of the “outstanding” new Whitehaven Academy building.

Trudy was given a guided tour by pupils Ethan, Isaac and Louis.

The pupils showed Mrs Harrison around the £20m facilities, including the new sports hall and dance/drama studios, and told her more about their roles as health and mental health ambassadors in school.

Trudy said: “It was an absolute privilege to visit the new Whitehaven Academy to see first-hand this outstanding new school.

“From speaking with the staff, pupils and my excellent your guides – Ethan, Isaac and Louis – the sense of pride the school community now has in the academy is overwhelming, and the pupils have the environment in which to develop and thrive.”

Trudy has worked closely with parents and campaigners to remove the previous administration at the academy and to secure funding for the new-build.

Trudy added: “Having gone through such adverse times, the future is now very bright for Whitehaven Academy under Headteacher Nigel Youngman, his team and Cumbria Education Trust. I also commend Julie Rayson and the Whitehaven Academy Action Group for their fearless determination in helping to bring about such transformational change.”

Work to demolish the former school buildings will begin at the end of the current exams period and be completed by October.