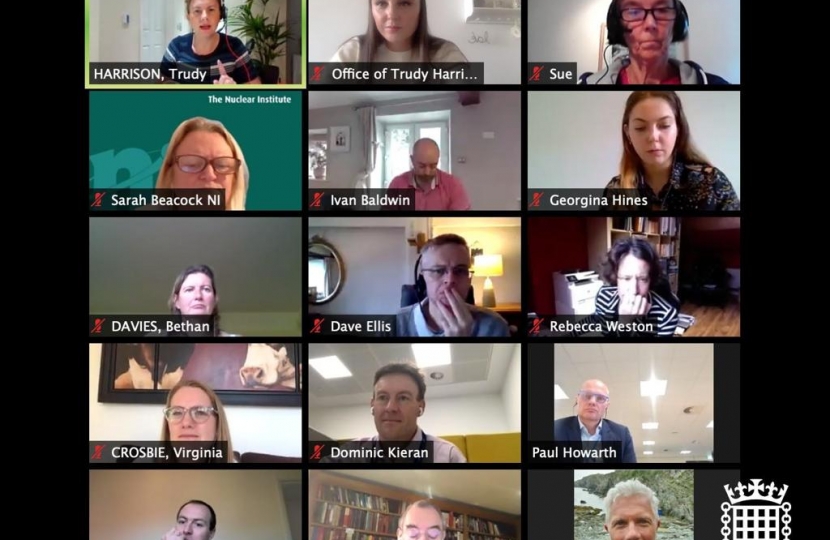 With less than a year to go until the United Nations 26th Climate Change summit, MPs Trudy Harrison and Virginia Crosbie held their inaugural Nuclear Development Group meeting with industry partners to discuss the role of atomic energy in achieving net zero and levelling up.

The MPs’ decision to take the lead and bring partners together is in advance of the Treasury Spending Review and Government Energy White Paper.

Discussions centred around the release of the Government’s Energy White Paper, COP-26, and timescales needed to achieve NET-ZERO by 2050.

Co-chair of the NDG and MP for Copeland, Trudy Harrison, said: “The UK’s nuclear industry can play a leading part in powering, heating and transporting our communities whilst reducing carbon emissions and setting a global standard.

“As nuclear advocates, Virginia and I want to help achieve that mission.  Developing a route to deliver for net zero, securing atomic energy prominence during COP26 and influencing Government’s Energy White Paper are our aims.”

As part of a ‘year-long’ countdown to COP26, this week, Prime Minister Boris Johnson is set to publish a 10-point plan for a green industrial revolution, expected to focus on ambitious targets and major investment into industries, innovation and infrastructure in order to accelerate the UK’s path to net zero by 2050.

Chancellor, Rishi Sunak will also deliver a one-year Spending Review on 25 November which will include investment in infrastructure to deliver plans to unite and level up the country and drive economic recovery.

Co-chair of the NDG and MP for Ynys Môn, Virginia Crosbie, said: “I am delighted to be working alongside Trudy Harrison MP to launch the Nuclear Development Group.

“As co-chairs we will be bringing together stakeholders which will be pivotal in moving forward the new nuclear agenda.  It is an exciting initiative as nuclear is critical to ensuring that the UK Government can meet its 2050 net carbon zero target.”

The Energy White Paper is expected to be released later this month detailing the UK’s pathway to net zero, and providing policy certainty that will allow the energy sector to drive forwards the transition.

The Nuclear Industry Association, which represents the civil nuclear industry in the UK, said: “We welcome MPs’ leadership in the formation of this group and support their goal of getting nuclear projects over the line.

"The UK needs new nuclear to hit net zero and to create good jobs for communities across the country. We hope that the Government will use the Energy White Paper to set out a clear and ambitious role for nuclear in securing a sustainable, prosperous future for this country.”

The next meeting of the NDG is scheduled to take place on Friday 27th November.

The Chancellor has said his ‘number one priority is to protect jobs and livelihoods’ after laying out plans to help balance the nations finances.