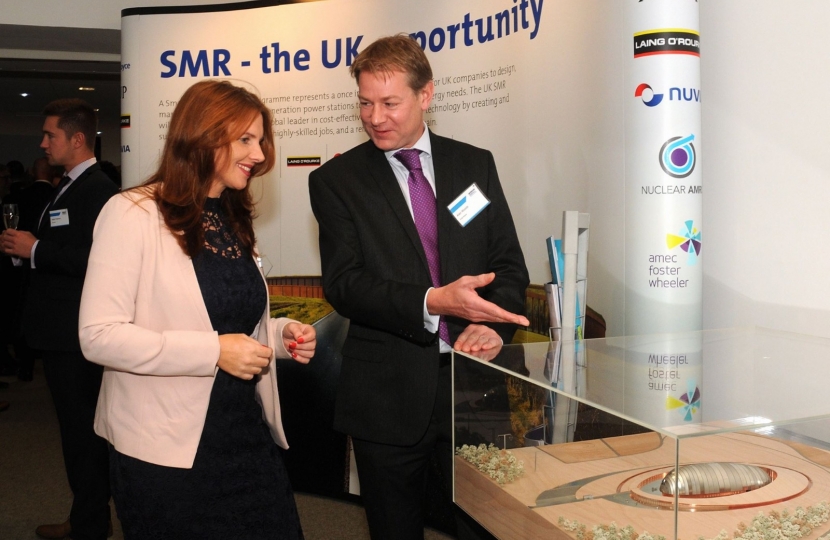 A commitment to develop large and smaller-scale nuclear plants as well as advanced modular reactors has been announced by the Prime Minister today.

Part of his ambitious programme for an industrial revolution, the Prime Minister has set out his ten-point plan focusing on clean energy, transport, nature and innovative technologies.

It includes a pledge to ‘push nuclear power as a clean energy source’ as well as including provision for ‘large nuclear, as well as for ‘advanced and small nuclear reactors.

Last week, Trudy co-chaired the inaugural meeting of the Nuclear Development Group alongside colleague, Virginia Crosbie MP; both MPs serve their constituencies at either end of the North West Nuclear Arc, which takes in many sites and industrial hubs benefitting communities with tens of thousands of highly skilled jobs.

Trudy said: “The Prime Minister’s ten-point plan to a cleaner Britain is a fantastic vision for our future, creating hundreds of thousands of innovative, skilled British jobs and I am pleased to see his commitment to new nuclear power.

“The urgency to create more than four times the current electricity provision is a stark reminder of the need for new reactors now - big, modular and advanced and it is important to recognise nuclear’s potential for more than power - also heat, propulsion and travel.

“I hope the vast and capable civil atomic industry is front and centre at COP26 and I hope Copeland is rightly recognised as the centre of nuclear excellence by the siting of the very first UK small modular reactor led by Rolls-Royce.”

The plan – which is part of the PM’s mission to level up across the country - will mobilise £12 billion of government investment to create and support up to 250,000 highly-skilled green jobs in the UK, and spur over three times as much private sector investment by 2030.

In addition to the 10-point plan, the Government’s Energy White Paper is expected to be released later this month detailing the UK’s pathway to net zero, and providing policy certainty that will allow the energy sector to drive forwards the transition.

Next week, Chancellor, Rishi Sunak will also deliver a one-year Spending Review, which will include investment in infrastructure to deliver plans to unite and level up the country and drive economic recovery.

Prime Minister Boris Johnson said: “Although this year has taken a very different path to the one we expected, I haven’t lost sight of our ambitious plans to level up across the country. My Ten Point Plan will create, support and protect hundreds of thousands of green jobs, whilst making strides towards net zero by 2050.

“Our green industrial revolution will be powered by the wind turbines of Scotland and the North East, propelled by the electric vehicles made in the Midlands and advanced by the latest technologies developed in Wales, so we can look ahead to a more prosperous, greener future.”