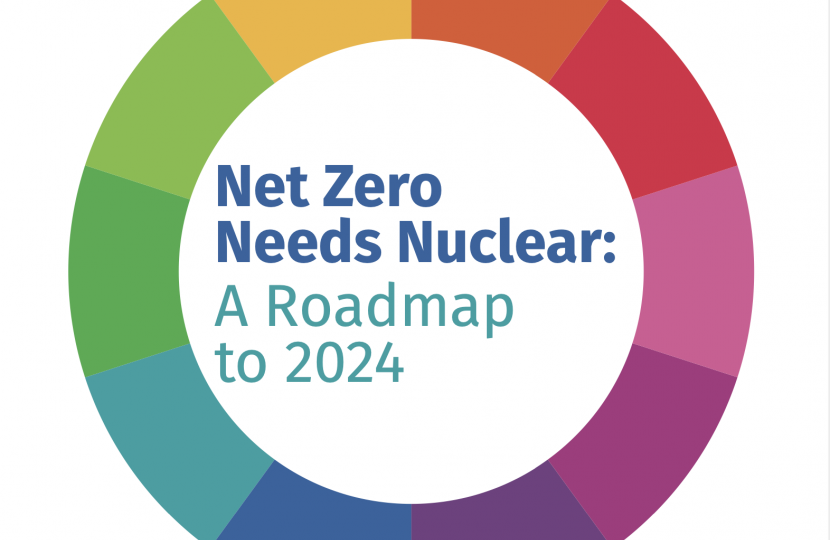 A nuclear roadmap highlighting the critical steps Government must take in order to achieve net-zero targets has been published today.

Launched by the APPG for Nuclear Energy, Net-Zero Needs Nuclear: A Roadmap to 2024, is the culmination of work spearheaded by the Nuclear Delivery Group Founder, Trudy Harrison MP and Ynys Môn MP, Virginia Crosbie, along with leading industry experts.

The APPG has called for the Government to create a new nuclear financing model this year, approve two large-scale nuclear projects by 2024, and establish the framework for deploying new Small Modular Reactors (AMRs) across the UK, among other steps.

These investments would save around 30 million tonnes of emission per year by 2035 and create more than 90,000 jobs in the UK. Nuclear jobs are already among the most skilled and well-paid in the country, with an average GVA per worker of almost £100,000.

The paper also highlights how nuclear can meet all of the Government’s ambitions to level up, reach net zero, and to build back better after Covid-19 by creating thousands of skilled green jobs.

Trudy Harrison MP, said: “This is the coming together of industry and nuclear sector organisations to guide government in better understanding current nuclear capability, the impending loss of more than 7GW and the role which high temperature gas cooled reactors and SMRs will play in the future nuclear power generation.

“I commend all involved for their tireless efforts over the past year and, as the MP for the Centre of Nuclear Excellence in Copeland, I will continue to lobby ministers to push forward our new nuclear agenda.”

The release of the paper follows a statement in the House in May marking six months since the launch of the Prime Minister’s, Ten Point Plan to a Green Industrial Revolution.

The Secretary of State for BEIS, Kwasi Kwarteng, said: “We are investing in the UK’s most important asset—our workforce—to ensure that our people have the right skills to deliver the low-carbon transition and thrive in the high-value jobs this will create.

“This is the case for the engineers and construction workers who will build the new offshore wind farms and nuclear plants to provide clean power to our homes, to the retrofitters who will make homes more comfortable and efficient.”

Please follow the below link for the full report.