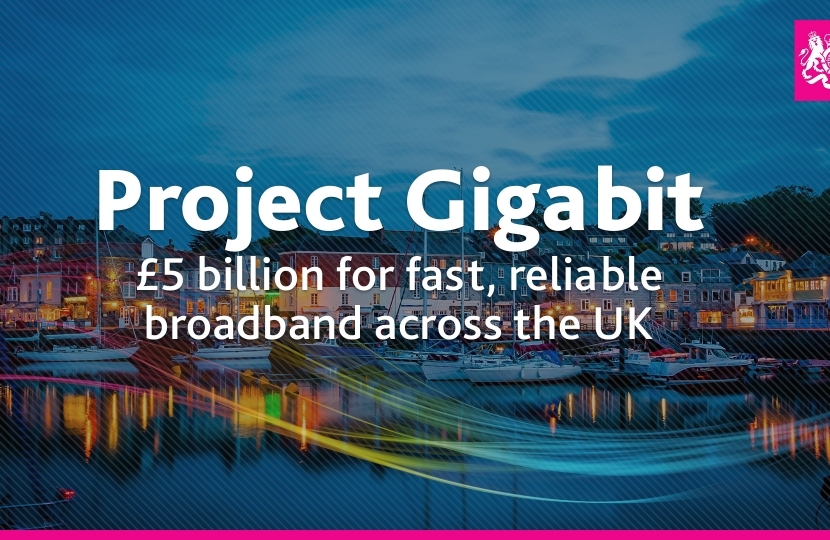 West Cumbria has been announced as one of the first areas to benefit from a new £5 billion scheme to ‘bring the fastest broadband on earth’ to hard to reach areas.

Launched today by the government, Project Gigabit will connect 60,000 to 80,000 hard to reach premises in West Cumbria including in the Lake District National Park from next generation gigabit broadband.

Their available speeds will rocket to more than 1,000 megabits or one gigabit per second.

Contracts for these first areas will go to tender in the spring with spades in the ground in the first half of 2022.

Trudy, said: “Slow internet connectivity remains a problem for many rural households and businesses across Copeland and today’s announcement to roll out next generation gigabyte broadband to those hard to reach areas is welcome news.

“Superfast internet has never been more important, especially when many of us are still working and learning from home so it is right that Government is recognising and prioritising those struggling with slow connections by ensuring they are the first to benefit.”

Gigabit broadband is being rolled out rapidly - from one in ten households in 2019 to almost two in five today. The UK is on track for one of the fastest rollouts in Europe and for half of all households to have access to gigabit speeds by the end of this year.

Project Gigabit will accelerate our recovery from covid, fire up high growth sectors like tech and the creative industries and level up the country, spreading wealth and creating jobs the breadth of Britain.

The successful Gigabit Broadband Voucher Scheme is also being relaunched with a £210 million cash injection to give people in eligible rural areas immediate financial help to get gigabit speeds.

Launched in March 2018, the scheme provided eligible areas across the UK with vouchers to cover the installation costs of bringing gigabit connectivity to people’s homes and businesses. So far more than 66,000 vouchers worth up to £127 million have been issued to premises across the UK.

The new vouchers worth up to £1,500 for residents and up to £3,500 for businesses will go live on 8 April 2021 and mean that rural areas will not have to wait for supplier contracts under Project Gigabit to reach them.

There will be a new online postcode checker available so people can check if their home or business is eligible for a voucher.

On top of this the government is making up to £110 million available to connect public sector buildings - such as GP surgeries, libraries and schools - in the hardest to reach parts of the UK with this revolutionary infrastructure.

Digital Secretary Oliver Dowden said: “Project Gigabit is our national mission to plug in and power up every corner of the UK with the fastest broadband on earth.

“We have already made rapid progress, with almost 40 percent of homes and businesses now able to access next-generation gigabit speeds, compared to just 9 percent in 2019. Now we are setting out our plans to invest £5 billion in remote and rural areas so that no one is left behind by the connectivity revolution.”