93 per cent of Copeland Constituency can access to Fibre broadband 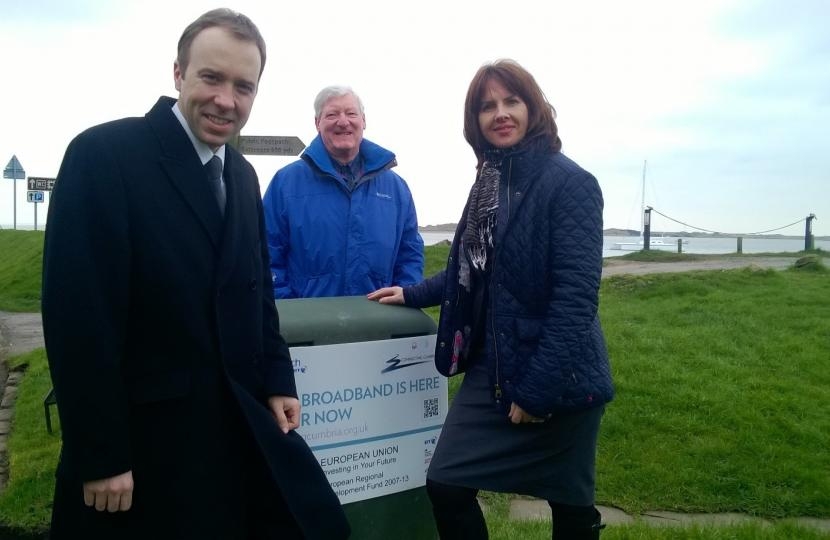 Trudy Harrison has welcomed news that 93 per cent of her constituents now have access to fibre-optic broadband.

This week, Trudy welcomed the upgrade of two new fibre-broadband cabinets in Copeland, one in Egremont, which also covers Wilton and a further two in Dunnerdale and North Ulpha.

Up to 26 premises now have access to improved broadband speeds in the Dunnerdale area of Ulpha, as well as an additional 21 homes in the North Ulpha area.

35 premises in the Wilton area should also now have access to improved broadband speeds following the delivery of another cabinet in Egremont earlier this month.

Mrs Harrison, said: “Access to reliable high speed broadband is becoming an increasing necessity for modern life as much as indoor plumbing and electricity.

“This is a big achievement given that superfast broadband coverage was almost zero in Copeland just five years ago.

“I wish to congratulate the Connecting Cumbria Programme, a partnership between Cumbria County Council and BT for all their hard work so far.”

Connecting Cumbria is aiming to bring superfast broadband to most properties in the county by the end of 2018.

Those who take up fibre services in their area will help towards triggering further investment into the Connecting Cumbria programme which will support expansion of further fibre services.

To date the Government has invested £33m into the Connecting Cumbria Programme.

As a community campaigner for over 10 years, Trudy worked on getting superfast broadband into Bootle and the surrounding area.